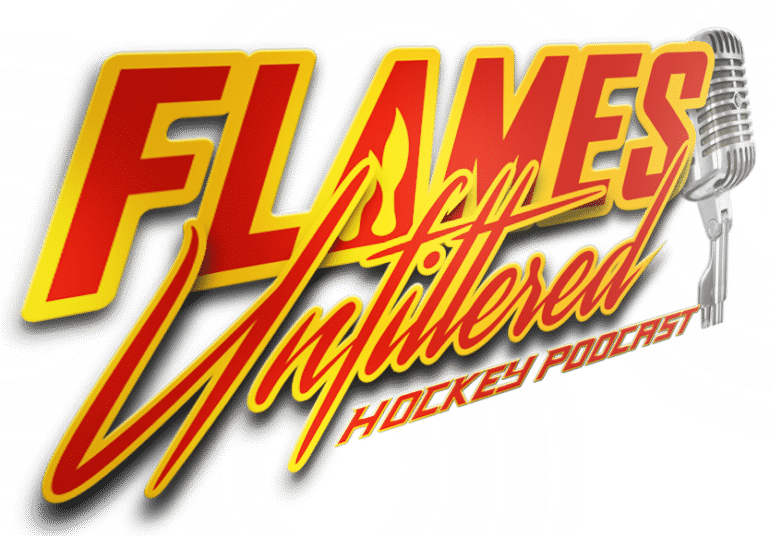 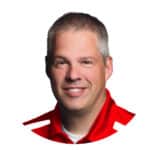 It started in March of 2019, while I (Brad Burud) was sitting in a bar outside the Xcel Energy Center in St. Paul, Minnesota.  It was mid-afternoon, my plane had just arrived.  Later that night I would be attending the Anaheim Ducks at Minnesota Wild game.  My phone buzzed…. a message from a fellow podcasting colleague.  He had an idea, a project him and his partner were going to take on.  A sports podcasting network.  They wanted my thoughts and to see if I was interested in starting a Calgary Flames podcast.  It did not take me long to answer that with a big YES!  So that was the start of this project.  I am extremely excited to see how it grows.  Flames Unfiltered was born because the Calgary Flames are my favorite National Hockey League team.  My passion for the team along with my passion for podcasting has formed a partnership that will entertain Calgary Flames fans and bring weekly hockey talk to everyone that cheers on the flaming C.

I thought in 1989 that winning the Stanley Cup was pretty awesome (I was 16, that is how we talked).  I wish I would have savored that feeling a little more…Well that feeling I had the night the Flames skated the Stanley Cup around Montreal ice was good but not the feeling I would have today if it happened.  I was young.  I thought it would happen more frequently, yep naive.  Well, thirty years later I am still waiting.  Had a couple great runs, but still waiting.  Someday the Calgary Flames will again raise the Stanley Cup.

I am a huge fan of hockey.  From youth hockey to junior hockey, and of course professional hockey.  I have played, coached, worked as statistician, worked as a television/radio color commentator, and have watched hockey all my life.  Hockey is not just a game.  It is a lifestyle, a way of life, and most importantly a tight knit family.  The game of hockey is great!  It can bring you nights of great enjoyment.  It also brings nights where you feel like your team will never win.  I am proud to be a media member for the greatest game in the world.  I have a degree in Business Administration, and Psychology from Minot State University, North Dakota.  I also have a Hockey General Manager and Scouting, and Sports Communications/Journalism degree from Sports Management Worldwide.  I am also a member of the Sports Executives Association.  Most of all I am a fan.  Hockey is a huge part of my life, and my family’s life.  I have a great wife (Charlsie) who is a funeral assistant and real estate agent.  We are blessed with three great children (Jagger-16) who is a baseball player and enjoys hunting and fishing, (Kenadee-12) is our golfer, she also loves going to hockey games with me, and only missed a handful of late-night Flames games last season.  We also have a crazy-fun seven-year-old girl (Laikyn) who is working on her skills to someday be a gymnast.  Hockey is a huge part of our family.  It teaches us a lot about life and has created many family memories for us. 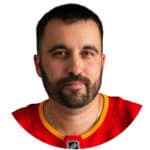 There was always something about the color red. I was always told I looked best in it, so it was hardly surprising when I became a Flames fan.  I fell in love with hockey back in the mid 90s. Since that time, I’ve become a regular visitor to Calgary and something of an adopted Calgarian. Despite the crazy start times on the east coast, I rarely miss a game.

Apart from my love of the Flames, I’m a fan of all thing’s hockey. I still play pick-up hockey, and I’ve been fortunate enough to meet and befriend many people in and around the game at every level. I also regularly attend QMJHL in support of my local team, the Moncton Wildcats. Oh, and I also collect game-worn Flames jerseys, which is a pretty cool (albeit expensive!) hobby. On the non-hockey side, I have a double major in philosophy and sociology, and I work in the construction industry where I am president of the Greater Moncton Home Builder’s Association and a director with the Canadian Home Builder’s Association.

From my first guest appearance on Flames Unfiltered, I felt Brad and I had a chemistry worth pursuing. I’ve never been shy with my opinions or thoughts on anything, so imagine how fortunate I felt when Brad actually wanted to hear more of them! When he asked me to join him as co-host, it was quite possibly the easiest decision I’ve ever made. We don’t always agree, but we go point for point like any two passionate fans would, and hopefully you find it as enjoyable as we do.

We thank you for checking out Flames Unfiltered and encourage you to check back frequently.  We appreciate and welcome any ideas or insight. Please just shoot us an email.  Always enjoy talking hockey, with hockey people…GO FLAMES!